In the very early 1970’s, a young British photographer called Daniel Meadow bought an old double decker bus, and traveled around the UK taking photographs of ordinary, working class British folk. The bus was better known as “The Free Photographic Omnibus,” and was Daniel’s home, darkroom and gallery for over a year and a half whilst he documented fleeting moments in the lives of the people he met along the way. Meadows took his pictures, developed the images overnight, and gave his subjects a print the following day before hitting the road again. Over the course of his journey, he apparently shot over 2,000 rolls of film. For me, as a Brit, exploring Daniel’s images is an autobiographical journey back to my early childhood.  Narrow hallways, floral carpets, headscarves, church on Sundays, and kids playing in the streets. English, Jamaican, Asian; all cultures thrown together; shopping in the same markets, wearing the same clothes. Meadows captured and recorded England in its 70’s intensity. You can almost feel the Great British damp and smell the cigarettes; hear Bowie on the radio and Wogan on the telly.

If you explore Daniel’s website you are introduced to not only his photography, but also his digital stories. Brief, personal narratives set over carefully edited images. Meadows spent the latter half of his career as a teacher at Cardiff University (where his students included Tim Hetherington), propagating the art of the digital story, including several that center around his time on the bus. Passionate, gregarious and charming, “meeting” Daniel Meadows through his digital stories adds another layer to the Omnibus legend. He has published several books including his latest, Daniel Meadows: Edited Photographs from the 70’s and 80’s, which accompanies the traveling retrospective of his career in the UK this year. Meadows’ work, in all it’s varying incarnations, is the perfect platform to be drawn into 1970’s Britain. 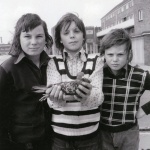